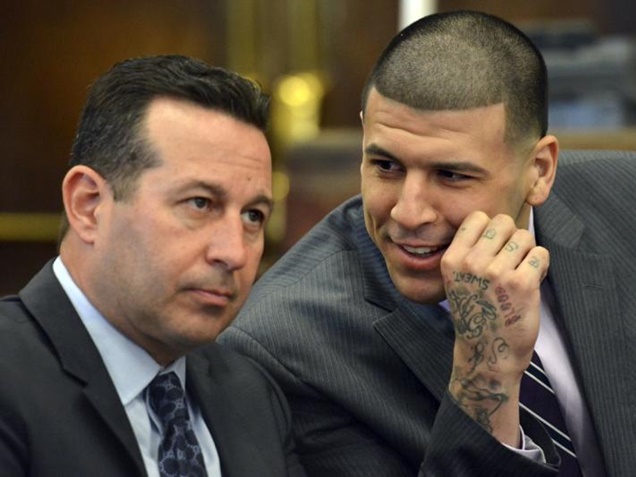 We just learned that former Patriots star Aaron Hernandez may now be off the hook thanks to a deleted text message from a vengeful gangster friend!

Wait until you hear these details on Aaron Hernandez, your head will spin…

On July 5, 2013, there was a text message that was sent attorney Robert Pickering and then deleted.

Now it’s being revealed that the vengeful gangster friend is none other than Alexander Bradley, who Aaron Hernandez tried to kill. If you recall he was cleaning up loose ends so, he shot Bradley in the head. Luckily, he survived and now he’s testifying against Aaron.

It’s now be discovered since Bradley, gave authorities full access to his phone, In a plea deal. The deal included all deleted and otherwise privileged communication with his lawyer.

The deleted text from Bradley wrote to attorney Robert Pickering reads as follows:

“Now u sure once I withdraw this lawsuit I won’t be held on perjury after I tell the truth about me not recalling anything about who shot me.”

During the most dramatic moment of the trial Hernandez attorney turned lemons into lemonade for Hernandez. He emphasized “The truth,” to Room 906 of Suffolk Superior Court in Boston. It was perfect timing on Jose Baez since he asked Judge Jeffrey Locke if he wanted to take a break at the 1 p.m. hour.

All week Bradley has been giving his testimony in detail that Aaron Hernandez was the triggerman for the killings of Daniel de Abreu and Safiro Furtado.

Now, Aaron’s attorney is trying to spin the murders on Alexander Bradley by painting a plausible alternative theory. Basically, Baez is trying to twist the truth in favor of Hernandez since Bradley is a two-time convicted felon and an acknowledged long-time drugs and guns dealer.

Baez is trying to win this case any way possible and if he can point the finger towards Bradley, and get the attention off Hernandez they there is a chance.

Here is a snippet of Jose Baez interrogating Bradley:

“I know you wanted to kill him [Aaron Hernandez]”

“Because you are a killer?”

The question was stricken after the prosecution made a sustained objection and had it struck the comment from the record.

It was an under-handed attempt to take the focus off Hernandez as the trigger man.

LatinoAthlete Staff - July 31, 2015
0
TMZ Sports has released the first video of Jon Jones to surface since he appeared before a judge in late April for a felony hit-and-run charge. In it, he...