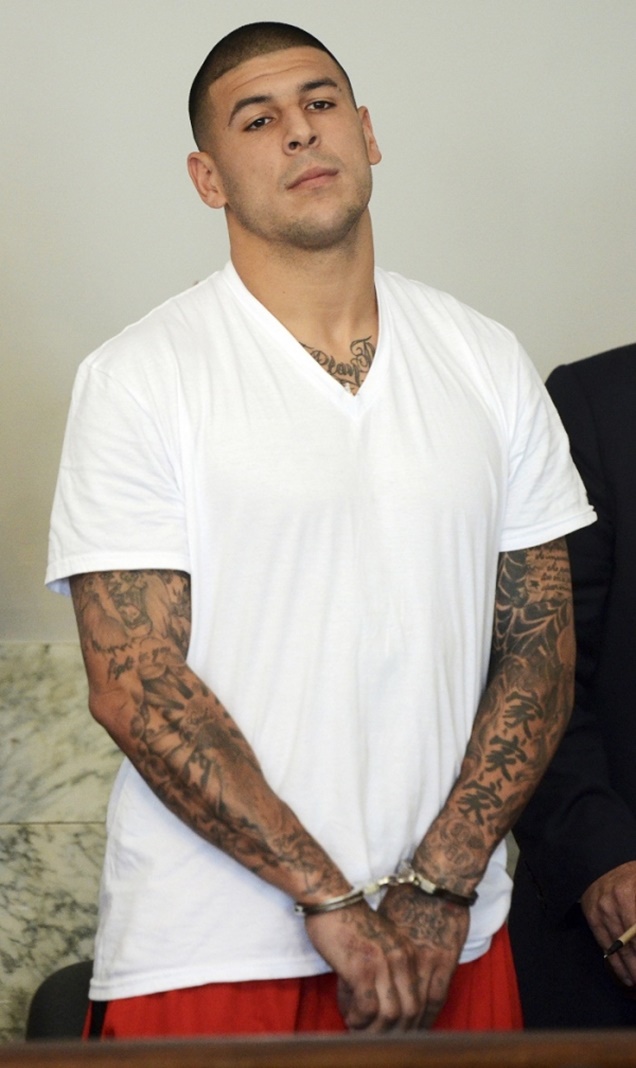 Aaron Hernandez and his attorney better be ready for court in February. A judge has decided that his gun tattoos prove to be evidence!!!

LatinoAthlete.com has learned that Aaron Hernandez allegedly memorialized his two violent incidents. The drive-by where he was identified as the shooter for the killing 29-year-old Daniel de Abreu and 28-year-old Safiro Furtado.

Aaron Hernandez attorney was unsuccessful to convince a judge to toss out the gun tattoos as evidence.

Instead, a judge has approved the prosecutor’s request to use his gun tattoos as evidence.

Why Aaron Hernandez Gun Tattoos will be used as evidence:

The prosecution believes that it’s no coincidence that Aaron went out and got a tat of a revolver with 5 bullets along with the words, “God Forgives.” It was noted this he got his tats right after the murders. As for the 5 bullets, it is said to represent the 5 bullets shot during the drive-by.

We previously told you about Aaron Hernandez gun tattoos were too coincidental and now a judge also agrees that there is more to the body art.

The trial is scheduled to begin next month on February 3rd, 2017.

It’s just crazy how such a talented NFL star threw his life away for murder. None of us know any athlete except for his skill on the field, but Aaron Hernandez is probably the most shocking. Next would be Ray Rice for beating his wife in an elevator and then dragging her lifeless body into a parking lot. She’s still alive and still with Ray.

Aaron is already serving one life term without bail. We wonder what will happen after this legal battle in court? Two life sentences? The Death penalty? What do you think about Aaron Hernandez gun tattoos?

LatinoAthlete Staff - August 14, 2015
0
The UFC middleweight champion of the world, Chris Weidman, will be back in action as an early Christmas gift to ultimate fighting fans, as...