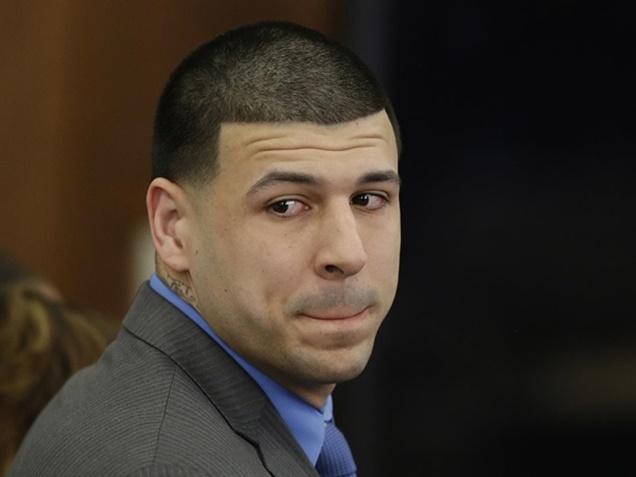 We just got word on the jaw dropping news that convicted murderer and former NFL star Aaron Hernandez was found dead in his Massachusetts prison cell. According to reports, Hernandez death took his own life.

Just days after his acquittal in a double murder case, former New England Patriots tight end Aaron Hernandez hanged himself with a bed-sheet attached to a window in his cell, LatinoAthlete.com has learned.

The incident took place at the Souza-Baranowski Correctional Center in Shirley. Hernandez was kept alone in his cell in a general population wing. They rushed Aaron to UMass Leominster trying to resuscitate him, unfortunately, the former 27-year-old NFL star was pronounced dead.

“Lifesaving techniques were attempted on Mr. Hernandez, and he was transported to UMass Leominster, where he was pronounced dead at 4:07 a.m.”

Aaron Hernandez may have been acquitted for the 2012 murders of Daniel de Abreu and Safiro Furtado. Aaron was convicted in 2015 in the murder of Odin Lloyd and serving a life sentence. Some might be saying justice served. Although, it’s very sad that Hernandez ended up taking his own life alone in a prison cell.

The statement reads as follows:

Aaron “attempted to block his door from the inside by jamming the door with various items.”

Aaron’s attorney Jose Baez, will act as the executor of his estate. He has also been retained by the athlete’s family to investigate the circumstances surrounding his death.

“The family and legal team is shocked and surprised at the news of Aaron’s death. There were no conversations or correspondence from Aaron to his family or legal team that would have indicated anything like this was possible.
Aaron was looking forward to an opportunity for a second chance to prove his innocence. Those who love and care about him are heartbroken and determined to find the truth surrounding his untimely death.”

Aaron Hernandez’ death comes on the anniversary of the day his former teammates visit the White House as Super Bowl champions.

What do you think about Aaron Hernandez found dead in prison.

Contributor - February 10, 2017
0
It's a BOY! Yes, Cuban MLB player Yasiel Puig Welcomes Little Slugger No. 2 into his family. The bouncing bundle of joy came into...