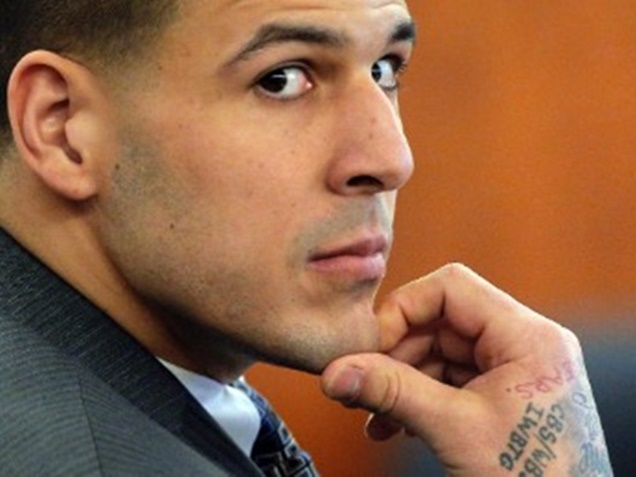 The Aaron Hernandez Double Murder Trial intensifies with witness Testimonials, shockers and wrenches thrown in the mix. What will happen next!!!

The Aaron Hernandez Double Murder Trial is becoming the OJ moment of “does the glove fit or not?” Read more…

LatinoAthlete.com has details from the Aaron Hernandez Double Murder Trial with one of today’s witnesses Aquilino Freire and Raychides Gomes-Sanches. Freire explained under oath to the court stating that he and his crew were “just drinking, having fun” inside Cure Lounge before leaving after 2 a.m. They left the club at 2:26 a.m. with de Abreu driving and Furtado in the front passenger seat.

When the reached the spot of the drive by, Freire recalled to the jury he heard a man’s voice yell:

“What up (expletive),” before gunshots rang out!

Freire was testied against the former New England Patriots star Aaron Hernandez, charged with killing de Abreu and Safiro Furtado. He described the moments before his friends died as they sat in a BMW in Boston’s South End in the early morning hours of July 16, 2012.

Daniel de Abreu friend, Aquilino Freire, who survived the brutal drive by tried to console his friend moments after he struggled to breathe from a gun shot in the chest.

He talked to de Abreu for about two minutes before he stopped breathing. Daniel de Abreu’s other friend Raychides Gomes-Sanches took the stand and said under oath:

He was shot, I told him:

Freire and Snaches were two of the three occupants of the BMW who were wounded, and luckily survived the attack.

IK Enemkpali reportedly once punched a man who posed as a...

LatinoAthlete Staff - August 27, 2015
0
Enemkpali arranged to meet with a "Missy Lee" on Facebook, who wound up being a man covered in a blanket. As...