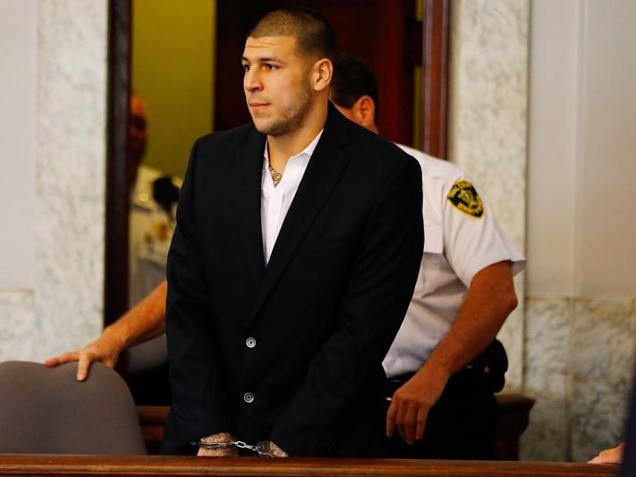 In the wake of his death, Aaron Hernandez 2013 murder case conviction has been cleared. Since Hernandez died before his appeal was heard in a court of law he is no longer guilty of his crimes.

Read on and get the details on Aaron Hernandez…

LatinoAthlete.com has learned that E. Susan Garsh, a judge in the Bristol County District, ruled on Tuesday that a legal doctrine calls for vacating Aaron Hernandez‘ convictions.

The judge said Aaron Hernandez died before the appeal was binding precedent, so his convictions will now be erased. Prosecutor, Thomas M. Quinn III is planning to appeal the ruling and take it all the way to the Supreme Court of Massachusetts.

“Despite the tragic ending to Aaron Hernandez’s life, he should not reap the legal benefits of an antiquated rule. State and federal courts from across the country have rejected this antiquated rule. Massachusetts, in my opinion, needs to follow suit.”

Jose Baez, Aaron Hernandez attorney asked the judge to overturn the conviction after he died, and he apparently got his wish. Meanwhile, John Thompson, a lawyer for Hernandez’s estate, and an appellate attorney, maintained that a conviction is not considered to be final until a higher court decides it.

Despite, Hernadez’s conviction being over-turned, Odin Lloyd’s mother, Ursula Ward, said the judge’s decision would not affect her view on Hernandez’s culpability. She will always maintain that Aaron killed her son!

“In our book, he’s guilty, and he’s going to always be guilty. But I know, I know one day I’m going to see my son, and that’s the victory that I have, and I am going to take with me.”

Regardless of the outcome and over-turn of Hernandez, Lloyd’s family could still proceed with a lawsuit citing a wrongful death against the estate of Hernandez.

Judge Garsh rejected the argument because no one will ever know for sure why Hernandez killed himself.

Why Aaron Hernandez allegedy took his own life:

If Hernandez was able to prove his innocence and get his murder conviction over-turned, then the New England Patriots contract has to be honored. There is $6 million at stake, that is why Hernandez wrote to his fiance, “you’re rich.”

This should also allow his fiance to get his pension and the balance due on his contract. Of course, Jose Baez is keeping a cool calm while speaking to TMZ:

LatinoAthlete Staff - June 23, 2015
0
The Kings coach is reportedly doing everything he can to get his team to trade the 24-year-old center. The Sacramento Kings have a...