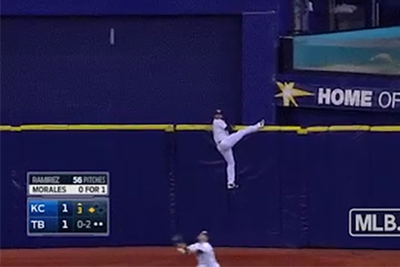 Tropicana Field and its catwalks can lead to some odd and confusing moments. Sometimes they result in mass confusion among the umpires. Other times they result in a hilarious scramble as players try to figure out what is going on. The latter occurred Friday night and it was wonderful.

Tampa Bay Rays centerfielder Kevin Kiermaier was tracking, tracking, climbing the wall to try and rob the homer and … the ball hit the catwalk and landed 20 feet in front of him. The play proved to be fairly uneventful as it was simply ruled a home run, but it did give us the gift of this outstanding photo from Will Vragovic of the Tampa Bay Times.

#Rays Kiermaier on the wall as Nava tries to get under #Royals Morales’ 2-run HR that hit the catwalk in the 3rd. pic.twitter.com/MtIsWExFfT

That looks less like two people playing baseball and more like Kiermaier is deathly afraid of a spider on the ceiling that Daniel Nava is trying to kill.

It’s been an eventful couple days for Kiermaier and Nava on defense. Earlier, they collided then celebrated with high fives.

Manuel Frias - December 12, 2016
0
The jig is officially up for Jeff Fisher. The Los Angeles Rams have fired their head coach of five seasons today. Read more...