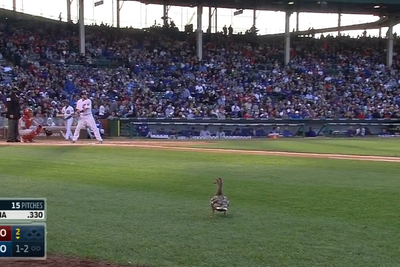 No, this was not an Aflac promotion.

Birds occasionally become a factor during MLB games, whether they are being hit by a Randy Johnson fastball or landing in the outfield looking for food. Some seagulls are one thing. A duck landing on the field and casually taking in some action is an entirely different situation. That’s exactly what happened at Wrigley Field on Tuesday.

Carlos Martinez and some of the other Cardinals seemed to enjoy it.

The Cardinals seem to attract animals while they are on the road. Earlier this year a few skunks invaded the St. Louis dugout when the Cardinals were playing the Dodgers.

LatinoAthlete Staff - September 1, 2015
0
Conor McGregor and Urijah Faber have reportedly had their share of run-ins. They will have plenty more opportunities to clash when they coach against...