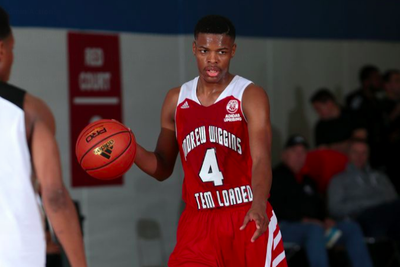 NC State has landed a huge commitment in the class of 2016.

NC State has landed the top point guard in the class of 2016. Dennis Smith, a native of Fayetteville, North Carolina, gave a verbal commitment to the Wolfpack on Thursday, according to Scout’s Evan Daniels. He chose NC State over Duke, Kentucky and others.

Smith is ranked as the best of a deep point guard class, according to ESPN, where he ranks as the No. 4 player in the class. Smith tore his ACL in August and is expected to miss his senior season of high school.

Smith is the second highest player in his class to commit so far, following Jayson Tatum’s commitment to Duke. NC State was considered the front-runner for Smith for a while, and is also angling to land his grassroots teammate, fellow five-star big man Bam Adebayo. It would be quite the recruiting coop for Mark Gottfried.

Smith is an athletic guard capable of hitting shots all over the floor. He can finish above the rim, too:

Smith and Adebayo both played on the adidas circuit. NC State reached the Sweet 16 last season.