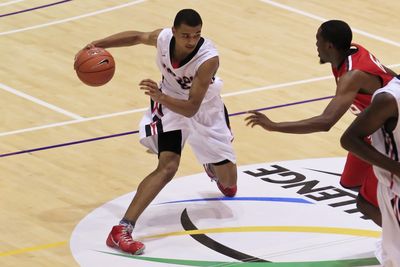 The Wildcats picked up a major commitment from the star of the Nike Hoop Summit.

The Kentucky Wildcats have landed the last 5-star recruit available for the 2015-16 season. Jamal Murray, a 6’5 combo guard from Canada, picked the Wildcats over Oregon on Wednesday to add to what should be another great team for John Calipari.

Murray reclassified from 2016 to 2015 just days ago. He broke out at the Nike Hoop Summit, leading all scorers with 30 points while adding six assists against the best players in the 2015 class. 247 Sports elevated Murray to the No. 10 player in the class when he decided to reclassify. Needless to say, this is a huge get for Kentucky.

This qualifies as a surprising commitment. Most expected Murray to pick Oregon after he reclassified. Kentucky already has two highly touted guards in the backcourt in sophomore Tyler Ulis and incoming five-star freshman Isaiah Briscoe, but there is a hole on the wing. Perhaps that means Calipari is thinking of starting all three guards at the same time.

Kentucky won’t be the same juggernaut they were a season ago, but adding Murray to a class headlined by Briscoe and elite big man Skal Labissiere makes things interesting. Returning players Ulis, Alex Poythress and Marcus Lee give Calipari’s team a rare blend of experience and five-star freshman talent.

Needless to say, Kentucky is going be one of the favorites for the national title once again.

LatinoAthlete Staff - June 16, 2015
0
Waiting out contract extensions can be an emotional roller coaster for fans. Once the deal is done, how do you know if...