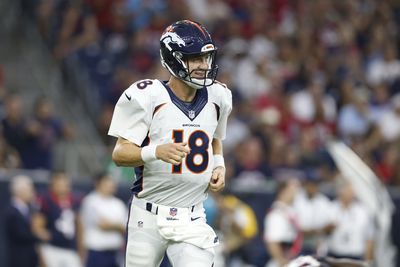 It’s not panic time in Denver yet, but Peyton Manning and the Broncos’ new offense didn’t look all that great last week. They hope to change that Saturday night against the 49ers.

The San Francisco 49ers and Denver Broncos shared the practice field together for two days this week and now they’ll face off at Mile High in the nightcap of a loaded NFL Saturday schedule. This is the all-important third preseason game, a dress rehearsal for the regular season as the intensity level ramps up and teams begin to install their gameday offensive and defensive schemes.

The 49ers endured one of the more tumultuous and bizarre offseasons in recent memory, but some positive highlights have emerged during training camp and the first two preseason games.

The return of NaVorro Bowman from his horrific knee injury suffered in the 2013 NFC title game is a truly inspiring story. Bowman hit the gridiron for the first time in 19 months in Sunday’s game against the Cowboys, and though he played just three snaps, he flashed the playmaking ability that made him one of the most feared defenders in the league in 2013. He made three tackles on those three plays, including two for a loss. If that brief performance is any indication, he could be a leading candidate for Comeback Player of the Year.

San Francisco might just have the most exciting player of the entire preseason in their camp. Australian Rugby League star Jarryd Hayne has been arguably the most electrifying guy on the field for the 49ers so far, dazzling fans with his remarkable punt returns and even showing promise as a runner out of the backfield. He leads the team with 117 rushing yards on 13 carries (9.0 yards per rush) and is averaging a ridiculous 21.6 yards on five punt returns. He’s had a tremendous two games, and now just needs to keep proving that he belongs in the league and deserves a roster spot.

The biggest news out of Denver this week was the signing of guard Evan Mathis, a move that should pay huge and immediate dividends for the Broncos’ offense. Before adding the two-time Pro Bowler, the Broncos were projected to have three first-time starters on the left side of the offensive line to protect the 39-year-old Peyton Manning. Mathis was the league’s top-rated guard from 2011-13 and ranked second last year, according to Pro Football Focus‘ grades. He is not expected to play in either of the Broncos’ two remaining preseason games, but he likely will be the the starting left guard when the Broncos open the regular season Sept. 13.

One of the key storylines heading into Broncos’ training camp this summer was how Manning would fit into Gary Kubiak’s run-oriented zone-blocking offense. Well, his first live-action snaps of the preseason last week were pretty underwhelming. Manning completed 8 of 14 for 52 yards (3.7 yards per attempt) and all four of his drives ended in punts. Despite the hype surrounding Kubiak’s power running scheme, the game plan didn’t look all that different when Manning was under center —  no huddles, audibles and plenty of passes. While it’s not time to panic and there is certainly going to be a learning curve for everyone, it would ease a lot of minds in Denver if Manning returns to form and shows he’s comfortable leading the new offense on Saturday night.