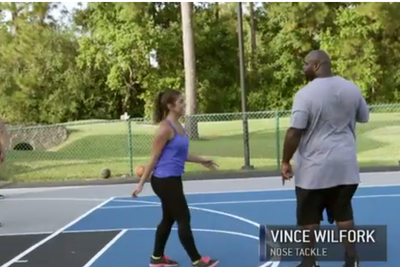 The large Texans tackle showed he can ball on the court too.

New Houston Texans defensive tackle Vince Wilfork is known for his many years of run stopping excellence for the New England Patriots. But as HBO’s Hard Knocks with the Texans this year will show Tuesday, he is quite skillful on the basketball court despite his larger than life size.

Vince @wilfork75? More like Vinny Buckets! You have never seen a big-man hoop like THIS! #HardKnocks http://t.co/0OqpmznqJL

Calling himself the “modern day Michael Jordan” comes with a lot of pressure. And early on, he was playing more like Air Darko, with this brick that didn’t even hit the rim.

But as the game progressed, the 325-pounder started to look like a larger version of Draymond Green.

We already knew Wilfork had moves on the football field and while smoking some ribs. Now we know he has some on the basketball court too.

LatinoAthlete Staff - June 26, 2015
0
Were you unable to devote your entire night to watching the 2015 NBA Draft? Then you're in luck, because we got everything you need...