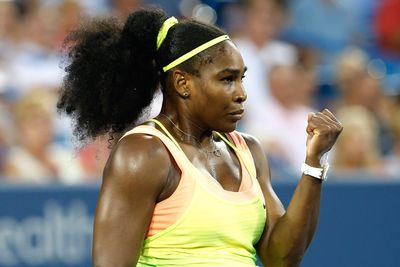 Serena Williams is looking to become the first woman since Steffi Graf in 1988 to win all four Grand Slams in a single season.

The women’s final at the 2015 U.S. Open sold out faster than the men’s final for what is believed to be the first time in tournament history, as noted by Darren Rovell of ESPN. And it’s easy to see why. Sure, men’s tennis is just as compelling as its ever been with Novak Djokovic, Roger Federer and Andy Murray at the top, but the women’s side has a truly dominant force who is chasing history every time she takes the court: world No. 1 Serena Williams.

Williams has been going at it for a long time at this point, but the 33-year-old has shown no signs of slowing down. This year’s U.S. Open gets underway on Monday, Aug. 31 and runs through Sunday, Sept. 13. The women’s final is set for Saturday, Sept. 12, and if Williams happens to play in and win that match, she’ll be the first woman to win all four Grand Slams in a single season since Steffi Graf did it in 1988.

Speaking of Graf, another singles title for Williams would give her 22 Grand Slam wins in her career, tying her with Graf for second place on the all-time majors list. It would also pull Williams even closer to Margaret Court, who sits in first place with 24 Grand Slam titles.

All eyes will be on Williams, but it will be an interesting draw regardless. By the fourth round, Williams has potential matches against players like Sloane Stephens, Agnieszka Radwanska and Madison Keys. All of those players could also be in the discussion to make the finals themselves, along with the staples like Victoria Azarenka and Simona Halep. Still, Williams has to be the overwhelming favorite.

Below, we’ve got the full women’s singles draw and the full schedule, updated daily with results.

No. 8 Karolina Pliskova vs. Anna Tatishvili
No. 19 Madison Keys vs. Klara Koukalova

No. 21 Jelena Jankovic vs. Oceane Dodin

No. 17 Elina Svitolina vs. Elizaveta Kulichkova

No. 31 Anastasia Pavlyuchenkova vs. Magdalena Rybarikova

Women’s singles Round of 16 (Winners from Day 5)

Women’s singles Round of 16 (Winners from Day 6)