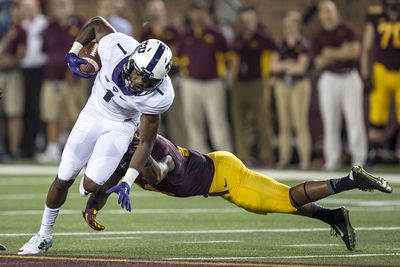 The Horned Frogs overcame sloppiness and a tough Minnesota team to start the season with a win.

It wasn’t the prettiest win you’ll ever see, but the No. 2 TCU Horned Frogs knocked off the rust and beat the Minnesota Golden Gophers 23-17 on the road in Minneapolis.

The game started slowly for both teams. TCU looked like it was ready to blow the game open after going up 10-0 in the first quarter, but the Frogs stalled. Minnesota did a good job of muddying things up for the TCU offense, but mistakes were plentiful for both offenses. Both teams turned the ball over twice on the night.

TCU led the second half with a Trevone Boykin touchdown run to make it 17-3, and once again you got the feeling they were about to coast to an easy win, but Minnesota once again dug their heels in and stayed in the game. They got to within 17-10, but a safety and a field goal for TCU gave them enough of a cushion to ride the game out.

1. Trevone Boykin isn’t perfect. Boykin was nearly unstoppable for much of the 2014 season, but he flashed some of his old bad habits on Thursday night. He frequently would make throws off his back foot or try to force passes where they shouldn’t go. It’s possible this could just be rust or he was a little too turned up for the season to start, but TCU fans should cross their fingers and hope this isn’t what they’ll see out of Boykin all year.

2. TCU’s defense is still legit. The Frogs lost several key contributors off their 2014 unit, including Big 12 Defensive Player of the Year Paul Dawson, so some regression was expected. They weren’t perfect, but TCU looked pretty sharp on defense.

3. Minnesota doesn’t seem like a lot of fun to play. The Gophers don’t seem overly impressive on first glance. You’re never blown away by their speed or power, but they’ve become a team under Jerry Kill that’s tough to run away from. With no team head and shoulders above the pack in the Big Ten West, it would be foolish to underestimate Minnesota.

Get one roundup of college football stories, rumors, game breakdowns, and Jim Harbaugh oddity in your inbox every morning.

LatinoAthlete Staff - July 15, 2015
0
Mike Trout has been the best player in baseball almost since his arrival, and certainly since the start of his 2012 campaign....