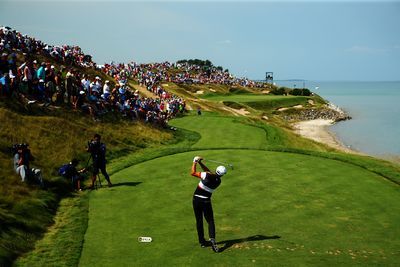 The weather has impacted yet another major championship but TNT has adjusted their schedule so you won’t miss anything on Saturday.

For the second time in a month, the cut at a major championship will not be made on time due to inclement weather. Storms with high winds and heavy rain moved in and hammered the PGA Championship late Friday, forcing the horn to blow at 5:28 p.m. local at Whistling Straits. The current leaders are still out on the course and the last tee time of the second round is already through 11 holes, so there’s not too much golf left to be played and this should be nothing like the disaster at the British Open.

It did not take long for the PGA of America to wipe out any hopes of a resumption Friday night after the storm arrived. They got everyone off the course and it became apparent pretty quickly that this was going to be a severe storm that would cause damage. So the players did not have to sit around and wait for a restart after the quick announcement was made that everything would resume at 7 a.m. local. There are still 57 players who have to finish up and they will be put in place on both nines at Whistling Straits with a range of one to seven holes left to finish. The expectation is that the second round will come to an end after 90 minutes.

TNT and the PGA take some heat for not coming on the air until the afternoon of the first two rounds (FOX and ESPN started at 9 a.m. local for the U.S. and British Open). There are also plenty of commercials and non-golf personal interest pieces that they get panned for each year. But they adapted quickly here and switched up the schedule so you won’t miss anything on Saturday morning. They will be live at 8 a.m. ET as soon as the resumption goes off and they will carry full coverage of the end of the second round, then roll right into the third round coverage (which was originally supposed to start at 11 a.m.).

The third round should start about 30 minutes after the conclusion of the second round. Players will all go off the No. 1 tee in groups of two, with tee times estimated from about 10:15 a.m. to 4 p.m. ET. TNT will have the early third-round coverage before handing things off to CBS at 2 p.m. ET. Obviously if the third round goes past the scheduled 7 p.m. ET finish, they will stay on late until the final pairing gets through their 54th hole of the championship.

So it’s going to be a long day but the good news is that the bad weather should mostly be behind us and the weekend looks clear. We’re not going to get a repeat of the Saturday disaster at the British Open, when wind pushed the conclusion of the second round all way to Saturday night and forced a Monday finish.

Here are all your media options for the adjusted Saturday at Whistling Straits:

8 a.m. to 7 p.m. — Marquee groups on PGA.com and on mobile via PGA Championship app

8 a.m. to 7 p.m. — TV simulcast stream on PGA.com and on mobile via PGA Championship app

Sepp Blatter thinks all his critics ‘should go to jail’

LatinoAthlete Staff - July 1, 2015
0
Sepp Blatter is not going away without making damn sure that everyone knows he's innocent. According to The Guardian, Blatter stated in an...