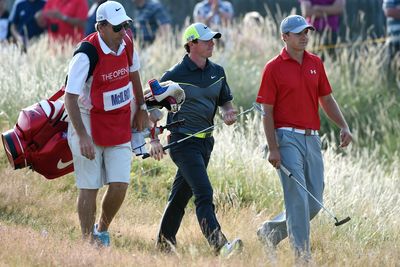 Tiger Woods, Rory McIlroy, and Jordan Spieth will hog the headlines as the men prepare for the PGA Championship, their final major of the 2015 season.

The final major of the men’s 2015 season is teeming with intrigue, as golf fans wonder what to expect from Tiger Woods and whether Rory McIlroy will make a Willis Reed return to golf at Whistling Straits. They’re also rooting for Jordan Spieth to complete the “American Slam.” The PGA gave the people what they want and put Rory and Jordan together for the first two days, turning the hype all the way up with less than a week before the first tee shot is truck.

Spieth, tuning up for Whistling Straits at this week’s WGC-Bridgestone Invitational, had his bid for the calendar grand slam come to an end at last month’s British Open. But the 22-year-old reigning Masters and U.S. Open champion can still make history by becoming the first player to claim all three majors contested on U.S. soil in the same year. Should Spieth prevail next Sunday, he would also become just the third golfer — after Ben Hogan in 1953 and Tiger Woods in 2000 — to win three majors in a single season.

In addition, if Spieth hasn’t taken over the No. 1 ranking from McIlroy with a win at Firestone, Spieth will have another chance to do so in Wisconsin. The PGA of America did not mess around and put Jordan with Rory. The typical practice at the PGA is to group all the first three majors winners of the season together, but there was obviously a duplicate winner in Spieth. British Open winner Zach Johnson rounds out the superstar tee time. The trio will start at 2:20 p.m on Thursday.

Except for some increasingly silly social media teasers that seem to hype his return from rupturing the ligaments in his left ankle, the defending champ has yet to announce officially whether he’s in next week.

In addition to that picture Friday morning, Rory also retweeted the PGA announcement of his tee time. The safe assumption is that he’s at least going to give it a go at the start, though we’re just nothing is official.

McIlroy’s last start ended in a fourth-place finish at the U.S. Open. After blowing out his ankle during a soccer game with friends over the July 4 weekend, the game’s top-ranked competitor was forced to miss title defenses at St. Andrews and this week at Firestone.

Woods, for the seventh year running, will be trying to capture his 15th major title, which has proven increasingly elusive since he last won a grand slam event at the 2008 U.S. Open. It’s likely he will leave empty-handed again, since the 262nd-ranked player in the world has not had much success on the links-style course. Even good friend Notah Begay contends that the track does not fit Tiger’s game. Woods finished tied for 24th at 2-under at the 2004 PGA in Sheboygan and failed to break 70 when he tied for 28th at the 2010 PGA.

Tiger, in the wake of a T18 finish at last week’s Quicken Loans National, will tee it up with Keegan Bradley and Martin Kaymer. They will start at 9:15 a.m. ET on Thursday.

Here are some more marquee groups and tee times for the season’s final major: