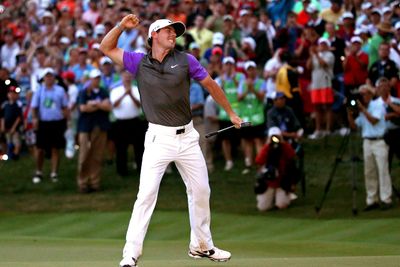 The top two ranked players in the world are the favorites this week; No. 278 Tiger Woods is not.

The No. 1 player in the world may be returning to the game at this week’s PGA Championship, but defending champ Rory McIlroy is still not the favorite at Whistling Straits. He would be the favorite, or at least co-favorite, in almost any other normal circumstance. But we haven’t seen him play since mid-June at the U.S. Open and there’s an obvious unease about how his ankle will hold up in competition when he starts planting off that left foot and bombing drives off the tee. That unease may dissipate as the week progresses and Rory plays more and more practice rounds, but for now, he’s just a lowly 10/1 to win the season’s final major.

Even with that injury uncertainty, there’s only one player with lower odds than McIlroy’s 10/1 mark. Reigning Masters and U.S. Open winner Jordan Spieth is the favorite this week at 6/1. He has been ever since Rory went down and nothing in his play has done anything to change that status. Spieth made an incredible run at keeping the Grand Slam alive at The Open — one that, even in defeat, only reaffirmed his place as the hottest player in the world for 2015. He’s only made one start since that appearance at St. Andrews, last week’s Bridgestone Invitational. Spieth never quite got it humming at Firestone, but a Sunday round of 66 did push him up the board for a top 10 result. The Grand Slam may be dead, but an “American Slam” is still alive and Spieth is a deserving favorite given all that he has put up on the board since last December.

Tiger Woods, who spent so many years as the favorite at every major regardless of his form, sits at 40/1 at the start of the week. Those odds would usually be incongruous with the 278th ranked player in the world, but there’s way too much interest and public money out there for Tiger. Even at 40/1, it’s still not a good bet. Tiger is not going to win this week. He looked … better and improved at the Quicken Loans National, his own tournament, two weeks ago. I don’t think he’s finished and I do think he’ll figure out how to at least play competitive major championship golf with a new swing. But he’s not close this week. Woods may make the cut, something he did not do at the preceding two majors, but he has nowhere near the consistency to keep up with all the younger talent ahead of him right now. Even if you’re the world’s biggest Tiger devotee, save your money.

Following Spieth and McIlroy at the top of the board are the usual big names and young bombers that regularly contend at these majors. Jason Day is 12/1 and is playing too well and has too good a track record at the majors not to be in the mix on Sunday. Dustin Johnson and Bubba Watson are always on the first page of the leaderboard this summer and they’re both 15/1. With Rory now back, it’s a loaded field and one the PGA of America likes to boast as the deepest of any major. At the start of the week, here are odds for all of the big names, via Jeff Sherman of the Las Vegas SuperBook and GolfOdds.com: