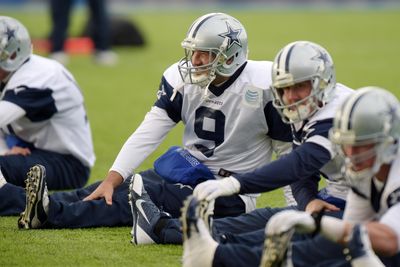 No team has earned back-to-back NFC East titles in more than a decade, but the Cowboys hope to break that trend.

When training camp opens for the NFC East at the end of July, there are plenty of questions that will need to be answered.

How will the Dallas Cowboys look without DeMarco Murray handling the brunt of the load? How will the Philadelphia Eagles deal with adding Murray to the fold along with everybody else after a crazy offseason of wheeling and dealing? Will Robert Griffin III finally return to form after a pair of ugly seasons?

The Cowboys enter the season as the favorite in the NFC East, but winning back-to-back titles in the division hasn’t been easy. The Eagles reigned over the division for four straight years from 2001-04, and since then, no team has been able to repeat as champion.

In the last four years, each of the four teams have had a turn atop the NFC East and there are three teams hungry to dethrone the Cowboys and recapture the division title.

Player you’ll be buzzing about: DT Tyrone Crawford — Crawford was a force last season, and though he doesn’t rack up huge numbers, he’ll be the player to watch throughout training camp as he makes a bid for more playing time and recognition.

What to watch: Last season, head coach Jason Garrett’s days were seemingly numbered and the Cowboys didn’t have high hopes … and then they were suddenly one of the best teams in the NFC. But now they’re without Murray, the NFL’s leading rusher last season, and have done very little to replace him. Darren McFadden and Joseph Randle will be the main guys to keep an eye on, but can they come anywhere close to Murray at this stage? We’ll at least get a good look at Dez Bryant, who will be attending camp thanks to a shiny new contract.

Most important position battle: Running back — Randle is the favorite to win the job, and he looked good in limited snaps in 2014. But the Cowboys need him to seize the job with force. McFadden, Ryan Williams and Lance Dunbar are also in on the competition.

For more on the Cowboys, check out Blogging The Boys.

Player you’ll be buzzing about: WR Josh Huff — The Eagles really like second-year receiver Huff, who likely has a higher ceiling than Jordan Matthews and who has more to offer than Riley Cooper. He needs a big showing in training camp to earn his playing time, though.

What to watch: No team in the league has changed as much as the Eagles have over the past couple of seasons. Just seeing what they look like will be interesting. Sam Bradford is the new starting quarterback, Murray is the starting running back and nobody has any idea if any of the moves will work out or totally blow up in Philadelphia’s face. But either way, it should be fun to watch unfold.

Most important position battle: Cornerback — Nolan Carroll isn’t a terrible cornerback by any means, but the Eagles are hoping that Eric Rowe can unseat him sooner rather than later. Although it’s a battle for the No. 2 spot, it’s still a starting spot and one of the bigger question marks on the team.

For more on the Eagles, check out Bleeding Green Nation.

Player you’ll be buzzing about: DE Owa Odighizuwa — He fell in the NFL Draft due to an injury history, but he should be seeing the field in the absence of Jason Pierre-Paul. He has first-round talent.

What to watch: A solid offseason went south when Pierre-Paul injured his hand in a fireworks accident. Rather than receive a massive contract extension, it’s now assumed that Pierre-Paul will miss all of training camp and his status for the start of the regular season is in doubt. The Giants will to look to Odighizuwa and others to fill that gap. Of course, watching Odell Beckham Jr. catch things human beings were never meant to catch should also be a good time.

Most important position battle: Offensive line — The Giants need to solidify every position on the line. Weston Richburg, Geoff Schwartz and Ereck Flowers should all play, but where they play and who else fills in will be a main storyline to follow.

For more on the Giants, check out Big Blue View.

Player you’ll be buzzing about: DT Terrance Knighton — A big fan favorite with his former team, Knighton was one of the best signings of this offseason. Washington managed to secure his talents for just $4 million for one year.

What to watch: The big question is whether Robert Griffin III can look good enough to give Washington hope. The team exercised the fifth-year option on his contract mostly because he’s all they have at this stage. But Washington can cut Griffin this season if things aren’t working out. He needs to have a strong grasp on the offense from the onset.

Most important position battle: Strong safety — Washington radically overhauled its secondary this offseason and all the other positions line up with obvious starters. At strong safety, Duke Ihenacho and Jeron Johnson will compete for the starting role.

For more on Washington go to Hogs Haven.

Not even Phil Jackson wants to be seen at New York...