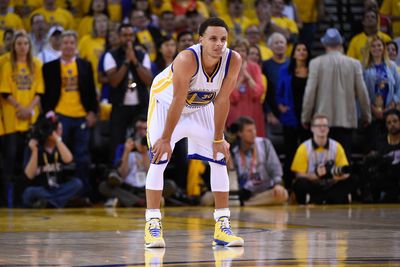 The Cavs and Warriors will each play 25 nationally-televised games. The Nuggets, Pistons and Sixers on the other hand…

We’re just about 75 days from the start of the 2015-2016 NBA regular season and on Wednesday the season inched even closer as the NBA announced the schedule for the upcoming year.

The two teams fans around the country will be seeing most frequently are the Cleveland Cavaliers and defending champion Golden State Warriors. Both teams will appear on ESPN, ABC and TNT a total of 25 times. The Clippers and Thunder will each play 24 nationally-televised games, while the Bulls will play 23, the Spurs 21 and the Lakers 19. The Pelicans and Anthony Davis will play 13 games on national TV.

TNT will be the home for the first national broadcast of the season, a doubleheader on Wednesday Oct. 27. The first game will feature the Cavaliers and Bulls, in Cleveland. Tip-off is at 8 p.m. ET. Following that the defending champion Warriors will take on the Pelicans in front of what promises to be a booming Golden State crowd. Tip-off for that game is at 10:30 p.m.

Only three teams in the league won’t be seen on a national broadcast all season: the Nuggets, Pistons and Sixers. The Knicks, after playing 16 nationally-televised games last season, will only get seven this year.

Here’s a list of the how many games each team will have on national TV. A total of 143 games will air on ABC, ESPN and TNT this season.

The second major day on the national TV calendar is Christmas, when five games will air nationally. The highlight of the Dec. 25 slate is the Finals rematch between the Cavaliers and Warriors in Golden State, at 5 p.m. and on ABC. Also on the schedule is Miami at New Orleans (Noon, ESPN); Oklahoma City at Chicago (2:30 p.m., ABC); Houston at San Antonio (8 p.m., ESPN); and Clippers *at* Lakers (10:30 p.m., ESPN).

The other day of note is Wednesday, Nov. 11, when ESPN will air a doubleheader featuring DeAndre Jordan and the Clippers taking on the Mavericks in Dallas. In the nightcap, LaMarcus Aldridge will return to Portland for the first time as a member of the Spurs.

This year’s national TV schedule will differ from years past. ABC will begin airing games on Saturday nights starting on Jan. 23 (Chicago at Cleveland). Those games will not be the only ones on the schedule, as ABC agreed not to have exclusivity to help the NBA reduce the amount of back-to-backs. The same goes for TNT on Thursday nights.