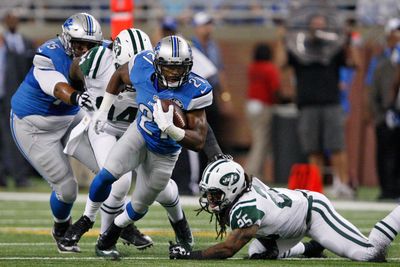 If you’re going into a draft, it’s nice to know who the hot names are. We break down some of the latest trends in average draft position, starting with running backs.

If your league is competitive, you have to know who the trendy players are. Drafting a great fantasy football team is all about value. Ideally, you take each player just before someone else wants to take him. Additionally, you don’t want to have your favorite target go right in front of you.

If you’re new to fantasy football, you may have heard about Average Draft Position (ADP) — if you’re not new to fantasy you probably hear “ADP” more than you’ll hear “TPS Reports” in Office Space. Every fantasy owner should have some idea of each player’s ADP because it gives you an idea when most people tend to take those guys. If you are aware of a player’s ADP, you can gauge when to take him. What’s more, you’ll also want to know which guys are in high demand and which players are falling off.

That’s where this column comes in. We’ll be taking a look at which guys are on plugged-in owners’ radars, when they go off the board, and why they’re going there. On the other hand, we’ll look at some guys losing some buzz. To be clear, there’s nothing wrong with taking a guy with a falling ADP as long as you’re getting good value on him.

Today, we’ll look at the running backs. Each column will have an ADP graph from the fantastic site FantasyFootballCalculator.com. The numbers you’ll see to the left side of the graph are the round and pick from a 12-team standard draft.

Running back ADP is really tricky. A back’s ADP can change based on a single play in the preseason or a big news item. In other words, things could change quickly and a hot property can go cold a week later. Usually, if a guy has a big preseason game and could start, his ADP jumps. Perhaps the perfect example is …

There are a lot of things to love about Abdullah. He has a chance to start, he’s a play-maker with every-down capability, he plays in a potentially high-powered offense and his competition has struggled to stay healthy. Abdullah ran for 67 yards in the preseason opener, including an explosive 45-yard run.

It basically moved his ADP 1.5 rounds, which is almost crazy considering none of his RB teammates had an injury. Abdullah’s ADP is going to probably take a bit of a dip back into the fifth round, which is a fair place to take him in a savvy league. If your league is savvy, he won’t be going past the fourth round.

Note: I did an industry draft on Monday afternoon and Abdullah was taken with the 37th pick in a 0.5 PPR draft.

His ADP just keeps rising. Darren McFadden is already hurt and the Cowboys are still expected to be a run-first team even though DeMarco Murray is now with the Philadelphia Eagles. Randle, like DMC, has some injury history himself and he’s also dealing with a bum hamstring right now.

Back in May, Randle’s ADP was close to the ninth round, so it’s been a steady rise for the aforementioned reasons. The problem is a third-round ADP is extremely lofty. He’s going around the likes of Frank Gore, Mark Ingram, and Alfred Morris, all of whom are much safer targets.

However, the reward is huge considering how amazing DeMarco Murray was last season. You probably don’t want to pounce in the third round if you can help it and perhaps going after a receiver there makes more sense. He’s a much better value in the fourth round.

The Titans are a strange team. Sankey let down a number of fantasy owners last year due to his inability to put up a big game and rip off big runs — the Titans not having a passing game didn’t help either. So why the ADP spike?

Well, coach Ken Whisenhunt said on Saturday he would be open to the idea of a feature back in his system. We don’t know for sure if that guy is in fact going to be Sankey, but that certainly would explain why he’s being drafted higher these days. Plus, Sankey is getting the lion’s share of the first-team reps.

His main competition is rookie David Cobb, so Sankey won’t be under too much pressure. If you’re looking for a lottery ticket in rounds 8-10, he could be your guy. Hopefully, his ADP doesn’t continue to rise.

There has been a lot of buzz around Murray within the team and from reporters. Specifically, I can recall a particular tweet from one of the Raiders’ beat writers:

Nothing boosts a player’s value quite like a couple of emojis. While we all know the problems within the Raiders, a featured back is still valuable in fantasy football. If for some reason the Raiders are able to be an offense in the 20-25 range, Murray will be a very solid RB2. Therefore, he’s worth his steadily rising ADP as of right now.

He’s an interesting case. Last season, fantasy owners were grossed out just at the sound of the words “Doug” and “Martin” put next to each other. Now, there is some buzz from the team without real merit. Fellow Buccaneers running back Charles Sims hasn’t made a charge yet, so many folks are expecting Martin to be the guy.

The Bucs did change their coaching staff, so that’s bad news for Martin, and of course he has an injury history. He’s actually not a bad value in the fifth round, but you’re really not leaving much room for a ceiling at that price. If you can let him slide to the sixth or seventh, it would go a long way.

As mentioned above, just because a guy is falling doesn’t mean he’s a bust. Heck, you might remember Odell Beckham Jr.’s ADP sliding because of a hamstring injury. Obviously that worked out for anyone grabbing a discounted OBJ.

Again, it’s all about value. If you can get a guy who was a fifth-round pick a month ago and grab him in the eighth, you’re in great shape. Of course, you have to know why. Lots of fantasy owners will want to take the guys everyone wants, but there’s nothing wrong with making a solid pick in the middle rounds. Although, you don’t want to do it too many times because hitting a home run in fantasy goes a long way.

Everyone loves the hot rookie. If the hot-rookie folks are all about Abdullah, naturally they won’t be as high on Gordon. The Wisconsin product had just 11 yards in his debut, so that is a big reason why he’s seen his ADP slide a bit. Additionally, the Chargers will want him to be better in pass protection and he didn’t shine in that area last week.

If he can slide into the fourth round, you’re looking at a heck of a lot more value.

Nothing causes an ADP to drop quite like an injury. Gurley is expected to miss the first couple games, according to NFL.com. The Rams are going to handle him carefully and we’ve all seen how it can take a guy some time to recover from a torn ACL.

If you’re OK with stashing a guy for the first three weeks or so, Gurley could wind up being a decent value in the sixth round.

Again, this one is due to an injury. Blount has a minor MCL sprain, but he’s already back to doing team drills. I would expect this one to rise soon.

If you can snap up Blount after pick 70, you’re doing quite well for yourself.

He’s seen his value slide quite a bit despite a teammate of his, Devonta Freeman, also dealing with a hamstring injury. Both guys are expected to be ready for camp, but fantasy owners generally are scared away from multiple problems. Coleman is hurt and he’s been rotating with the first- and second-team offenses.

If Coleman can last into the eighth or ninth round, he could prove to be a solid value.

Farwell Ronda Rousey; Amanda Nunes was NOT a Comeback

Kevyn De La Cruz - January 31, 2017
0
Ronda Rousey long anticipated fight against Amanda Nunes was a straight up let down. She got her ass served on a silver platter or...