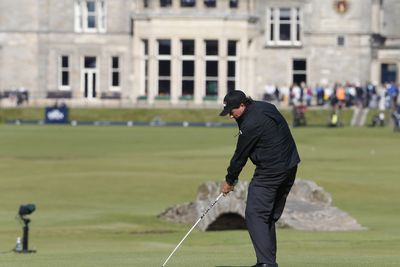 The tee times draw matters more at The Open than any other tournament because of the fickle changes in the weather. Thursday morning’s group, which includes Tiger Woods and Jordan Spieth, should have relatively calm and good scoring conditions.

The Open Championship is the game’s oldest major and it’s separate and unique from the other three in so many ways. The obvious ones are that it’s the only major abroad and it’s always played on a true links style course in dramatically different weather conditions from the US majors.

But another way The Open stands out is how the field is slotted on the tee shot. A links course is meant to be played from No. 1 through 18, and never with a split-tee system of half the field going off No. 10. Because of where and when The Open takes place, the entire 156-man field is able to go off the 1st tee. That’s an unrealistic dream at the U.S. Open, which is played during the longest days of the summer, and at the PGA Championship — two majors that have the exact same size fields. The two U.S. majors try to dodge any inclement weather and grind to navigate 156 players off two tees through 36 holes of sun-up to sun-down before the cut is made.

In Scotland in mid-July, the sun rises around 4:30 a.m. and does not set until just before 10 p.m., although you can play golf much later than that. So there’s actually ample time to send 52 groups of three in rolling tee times all off No. 1. Everyone has the pleasure of hearing their name called by Ivor Robson, the legendary and distinctive starter at The Open. Robson has called each player’s name and country at The Open for 41 years but this one at St. Andrews will be his last. His voice is unmistakable and you will hear him bright and early in that wide-open 1st tee setting at the Old Course, where he will not take a bathroom break for the entire day.

Scotland is five hours ahead of the Eastern U.S. so tee times will being at 6:32 local and 1:32 ET. Much is made of the draw at the Open — are you early-late or late-early for the first two rounds? The tee time impacts a player at The Open more than any tournament because the weather turns so quickly and can present an entirely different course from morning to afternoon.

This year, the good side of the draw is supposed to be the late-early group because Friday afternoon is looking brutal with 45 mph gusting winds. Jordan Spieth, Dustin Johnson, and Tiger Woods are among the tee times scheduled on the unlucky side of the draw. Friday may be ugly for that group, but Thursday should be smooth. Spieth goes at 4:33 a.m. ET and will be on the marquee group stream on ESPN3/WatchESPN. Tiger Woods is just two groups later at 4:55 and while he won’t have his own stream like last year, you know his every shot will be featured prominently on the broadcast (which comes on the air at 4 a.m. on ESPN). It’s supposed to be relatively dry and calm Thursday morning, so those two may need to post a low number given what may await the following afternoon.

Here’s the full tee sheet for the opening round at St. Andrews (all times ET):

‘Let There Be Lightning’ and 25 other things a Hockey Pastor...